In loving memory of Ron Amos 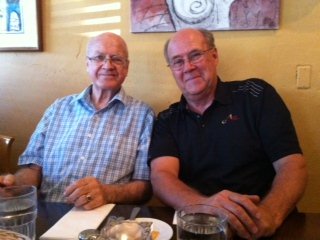 He was born in Silverstream, Saskatchewan moving to Penticton at the age of six. He enlisted in the army at sixteen and served with the Canadian Grenedier Guards Tank Division. His overseas duty saw him in the European theatre including the Hochwald Forest and the Falais Gap ending when he volunteered for Pacific services as the war ended. He was haunted the rest of his life with his memories which he seldom talked about. This led him to become a tireless volunteer to contribute to the families of those who did not come home. He became President of the Legion, Zone commander, Pacific and Federal levels; member of the Oliver Fastball League; President of Kiwanis; Akela (leader), with Dorothy as Brown Owl, for the Boy Scouts; Masonic Lodge and Shriners; RCMP Auxiliary policeman; served on the Board of Directors to design and build the new Sunnybank; ran as one of the first candidates for the Reform Party.

He married the love of his life, Dorothy Jean, on February 10, 1948 and celebrated their 65th anniversary this year. Together they had three children, Brian (Karen), Wayne and Nancy (James); grandchildren, Trevor (Lisa), Kelsey ( Anders), Sara (Brian), Katie (Adam), Mathew and Erin. He was predeceased by his great-grandchild, Mya Anne (daughter of Trevor and Lisa). He is the last man standing for many of those that are dear to him and he headed home, rocking Mya Anne in his arms, to reminisce.

In lieu of a service, Ron requested that those who wish to pay their respects visit Dorothy at Mariposa Gardens, Osoyoos at there convenience.

This entry was posted on April 26th, 2013 by Century 21 Amos Realty | Posted in General

In loving memory of Ron Amos

All information displayed is believed to be accurate, but is not guaranteed and should be independently verified. No warranties or representations of any kind are made with respect to the accuracy of such information. Not intended to solicit properties currently listed for sale.